States across the country are in a rush to pass legislation limiting the use of high-tech drones by police. In another case of technology moving quicker than lawmakers, police departments have been buying up to former military-only devices in hopes of using the new toys in surveillance and who-knows-what-else. But, unlike other states, Arizona recently backed off proposed legislation, too concerned about the money that these robots-in-the-sky could bring in.

As late as March 6, Rep. Tom Forese (R-Chandler) was set to argue his a bill in front of the state House that would have required law enforcement agencies to obtain a warrant before using a drone in surveillance operations. His bill made it through House Committee on Feb. 20.

Support for the measure was overwhelming on both sides of the aisle. 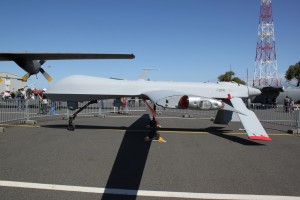 “State lawmakers of both parties have realized this issue is critical in voters’ minds, and they’ve decided to take a stand for privacy,” said Trevor Timm with Electronic Frontier Foundation. “In all my work at EFF, I’ve never seen anything that so unites the left and right. I think it underscores that this is a nonpartisan issues that has struck a chord with people.”

On March 7, however, news reports indicated an about-face in Forese’s take on drones. He want from proposing cops get warrants to leaving things “as is” and instead creating a committee to “study the matter further”.

On March 8, on the floor of the Legislature, Forese voluntarily gutted the bill. What would make a lawmaker assumingly committed to civil liberties change his mind in such dramatic fashion? One word—money.

Arizona currently stands to become one of six sites for testing of unmanned drones. The Federal Aviation Administration announced they were looking for such sites and being chosen would certainly be a windfall for the state. The industry is a multi-billion dollar one, and it is growing.

As it was written, Forese’s bill could have made this opportunity more difficult.

The amended version of Forese’s bill, the one that keeps Arizona police agencies free to use drones without warrants, passed overwhelmingly by a vote of 54-5.

When asked about the change of heart, Forese said that concerns expressed by law enforcement officials spoke to him, that there were “many valid reasons for police to be able to use drones without first having to go to court.” He compared drones to helicopters, only with cameras on board that “indiscriminately record everything.”

When lawmakers can overlook potential violations of privacy and allow the possible infringement on citizens’ rights, all for money, we have to wonder who is really running things—the politicians or the cash. Regardless of the amount of money that drones could bring into the state, we have to ask what is their true cost.

Police agencies in Arizona can use drones if they have them, and right now it isn’t clear which agencies own the “toys” and which are already employing them. Still, you have rights. If you are accused of a crime, you need someone on your side who understands these rights and can help you fight to clear your name.